An intergalactic serial monitor for the ESP8266 Deauther v3

Check out serial.huhn.me for a web based serial monitor.
A great alternative that works with all Arduino projects and doesn’t need to be installed. You just need a compatible browser, like Chrome for desktop.

But no worries, it doesn’t replace this project. Huhnitor remains to be our terminal based serial monitor!

Please note that while this software can be used for other serial devices and projects, it is designed to be used with the ESP8266 Deauther Version 3. 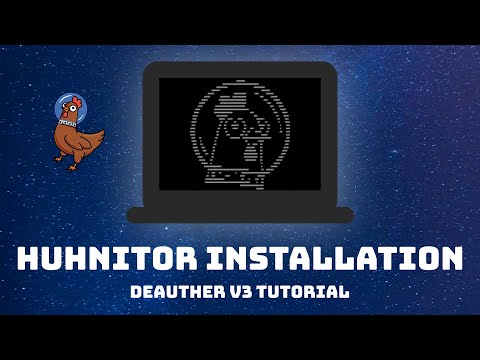 If you get a huhnitor not found message, try adding snap to the PATH by running export PATH="$PATH:/snap/bin".

Pro tip: Homebrew can also be installed on Linux, and the Windows Subsystem for Linux.

Precompiled binaries can be found at releases.
But if you want, you can compile the Huhnitor yourself:

The Huhnitor is designed to be as easy to use as possible:

If the huhnitor has issues connecting to your deauther, try running it as administrator or via sudo huhnitor.
You can also give a user permission to access the serial ports by running sudo usermod -a -G dialout <username>.

The Huhnitor can run scripts (a series of pre-written commands) if you enter huhn read [filename] once you are connected to a deauther. The file paths are relative to your current command line location (not the executable’s) and are essentially a series of newline separated deauther commands.

To stop running a command on the deauther, you can hit ctrl + c, which is in theory more convenient and should help to prevent accidental disconnects. This does, however, also mean that you cannot exit the Huhnitor with ctrl + c, therefore once a serial connection has been opened, entering exit must be used to exit the Huhnitor.

Your deauther is not detected when plugged in?
Make sure the USB connection is working. Some cables can only charge but not transmit data.
Depending on the serial chip that is used on the ESP8266 development board you have, you might need to install the right driver:

Not sure which one to install? A lot of ESP8266 based development boards use a chip from the CP210x family, try starting there.

Made with :heart: by Jamz with help from Selicre
in cooperation with Spacehuhn Technologies

This software is licensed under the MIT License. See the license file for details.